Action games always attract a large number of players, especially young people today. That is why all kinds of action games always have a large community of players. And outperformed compared to other games. Action VR is a new concept coming out recently, but it’s a new game trend. With VR technology for a new and engaging experience, players are immersed in the context of the game for a more real, engaging experience. 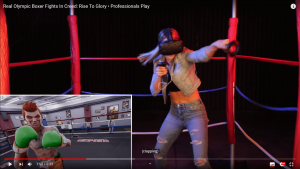 Typically on steamvr is Superhot: The player wearing vr glasses uses the controls of their weapons to shoot at the dummies approaching him, it’s a bit more combat, more violent. You can use your hands to hit, use a stick to hit the figure. The player only focuses on skills to move, fight, use weapons to destroy targets.

This action VR game is suitable for young people who love violent action, relaxing play and physical activity. It is also among the most popular games in the VR app store today. 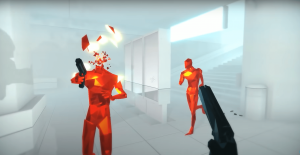 In addition, the Survios VR boxing Game: Typical as BoxVR when a player wearing glasses will transform into a puncher and will compete with another fighter in the stands, rules, and other interactions just like a match. Real box punching, with space and immersion in the 3D environment, players are really attracted by new virtual reality technology, instead of watching TV or playing normal 2D games.

And there are many other action vr games like punching, kicking, hitting other targets with moving, or moving and attacking towards you for example.

In today’s popular sports, most have simulation games, or experience them in traditional 2D. But now the game scenarios and the gameplay of those subjects can be experienced in a much more exciting and immersive 3D environment.

Typical for this category we can see the following:

Players wearing VR glasses will be transformed into F1 racer and control their racing car in the virtual racetrack set up in 3D, you can compete with other racers like in real life.

Similar to the above, Moto vr racing game too, it can attract VR racing athletes to play or compete with each other. You can play real tenis with glasses on, fight a 3D virtual athlete with realistic and engaging gameplay, and even have an audience full of spectators cheering for you to play.

Everyone can also play table tennis with a virtual athlete, or play together while wearing vr glasses. Such games will stimulate and attract the experience and spread very high technology. 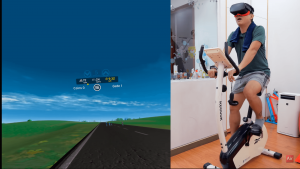 The most beautiful VR cycling game sceneTo transform into cyclists passing through beautiful road scenes around the world, such as the race track of France, the Water Shui, Spain, Italy, the Bike Racing Game is both entertaining and training Fitness with real bike can be pedaled.

The current fighting games are very enthusiastically received with VR technology, these games are very diverse for players like. Fight alone to achieve your goals or play with your teammates for the best results.

Palov VR: Also a good fighting game you can refer to.

Arizona Sunshine is another combat VR game that should also be played, it’s just as attractive. 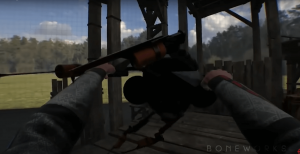 PISTOLWHIP: is a typical example for action fighting game, fighting with weapons and destroying opponent’s targets. Vr players will experience both the context and level of each level of the fighting genre

Typical for acting like wearing VR glasses while being able to operate full body, creating excitement for players during game play

Beat saber is a trend on the vr store, a simple game, fast and flexible movement, combining wearing vr glasses and moving body, limb action to destroy head blocks of color. flying from all directions. The soundtrack is vibrant and easy to play. Beat saber and other modded versions have created a huge VR gaming community, which is the success of the game.

Gorn: Action and experience game, creepy combat, very peculiar scenes and characters, players must have a strong mentality, and good health to withstand the characters, game scenes, episodes in that game

Lone echo: is a VR game that experiences space with the technology of fictional machines. Fitness plus: is a good action game, movements based on real fitness exercises, helping players move, while there is another task that is to hit many targets from many directions, This game helps the player to maximize mobility and is stimulated by the bonus points that the targets have been defeated.

On the VR market, there are many different vr action games and are very rich to choose from

Based on preferences, playing purpose, genre to find the action vr game it most suitable for, to get the highest performance today.

Playing the games available on the market raises problems with both gameplay and usage. Agencies and media, apart from attracting customers also want customers to contact the products, brands, logos .. that games are available.

Write new scenarios or mod those games to be able to bring everything into the game as you like, having been selected. The cost may be higher but in return, all requests and ideas of the agency are met.

VRTECH … JSC is a company specializing in making action vr games according to the orders of the business, the company according to each individual scenario. With experience in the VR field, we will quickly resolve the agency’s requests in the best way. Please call 84.926809286 for advice